As a group lots of us found that moving into our own homes was really difficult often because we didnt feel we were prepared for this, particularly in terms of our independent living skills and budgeting. Some of us felt that we hadn't been taught how to budget properly before moving into their own home and this meant that we often found ourselves with just pounds or pence on the days before payday. 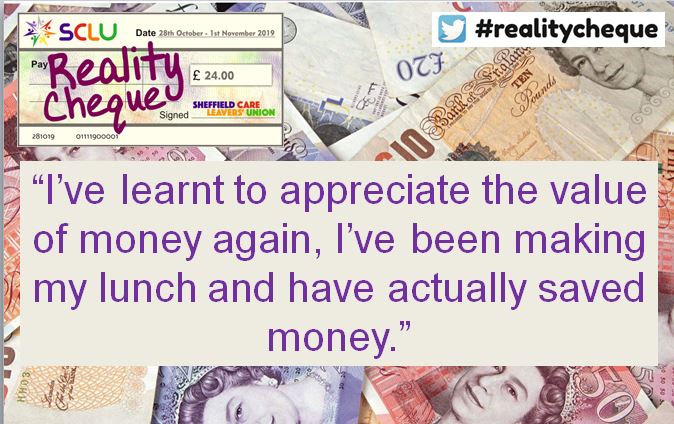 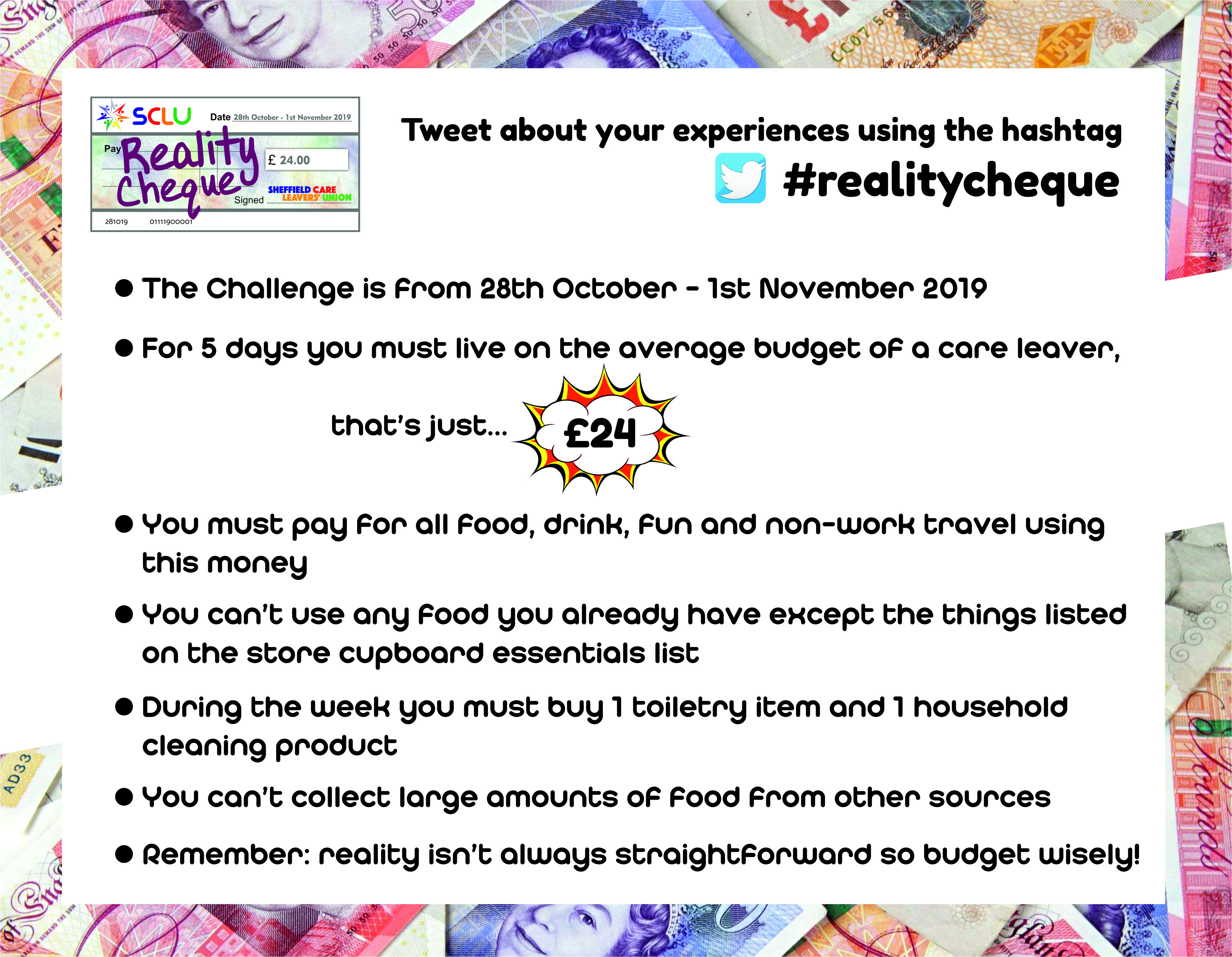 When we have looked at what research tells us, most of it says that care leavers often struggle to manage their money. This is because many have a low income but also some haven't been taught how to budget properly. A consultation completed by SCLU showed that a lot were living on a low income, and many talked about being in debt or rent arrears.

As well as SCLU’s consultation, 105 in the city completed a survey called Brightspots which looked at the things that affect wellbeing like finances and housing. The results of the survey (completed in 2018) showed that care leavers in Sheffield are three times more likely to report financial difficulties than young people with no experience of being in care.

So, to raise the issue of budgeting the members of SCLU decided to set the Reality Cheque Challenge.

What is the Reality Cheque Challenge?

The challenge asked participant to live on £24 for 5 days. This amount was based on a young person receiving Universal Credit. We chose to use a Universal Credit amount as this is the benefit care leavers will receive if they aren’t working, however we know there is a huge proportion of care leavers who are working etc. However, being strapped for cash at the end of the month happens to us all if we haven’t been taught how to budget properly.

To work out the £24, we took the amount of Universal Credit for 5 days and then took off an average amount for rent and also bills such as gas, electricity and water. However, from talking with workers and care leavers we think we probably underestimated the cost of bills, particularly as we didn’t include phone or Wi-Fi costs.

The £24 given to participant had to be used to pay for all the food and drinks across the 5 days! The money also had to be used to pay for any activities such as attending the gym and any travel (apart from getting to and from work). We also asked participants to buy one toiletry item like shampoo, shower gel or deodorant and one household item like toilet roll or washing up liquid because these are items that you would need to replace most often.

On the Wednesday of the challenge week everyone who took part received a secret envelope. This contained either a “windfall” where they gained extra money (for babysitting, a birthday or finding a few quid on the floor) or a “Challenge” where money was taken off them (e.g., an unexpected bill, court fine or needing to buy baby clothes). Amounts ranged from 5p to £10 and either made or broke most people’s budgets.

Why did we set the challenge?

The main reason is because we want to raise people’s awareness of the issues care leavers face with finances and budgeting. SCLU want to try and ensure that all young people in care are taught how to manage their money and budget from an early age, so that when they move into their own houses all care leavers have the skills needed to manage their money, no matter how tight their budget.

We wanted to challenge people’s negative image of care leavers and help people working with care leavers to be a bit more understanding when a young person is having money difficulties.

We wanted our corporate parents to think about different ways they can support care leavers. This includes ways that they can support young people to develop budgeting and independent living skills from an early age. It could be ways to help when money is tight. We also services and businesses to help care leavers to access activities that can reduce isolation and loneliness but cost money.

What did we achieve?

Across the week 90 people took part in the challenge including the Chief Executive, Director of Children’s Services and lots of PA’s.

The challenge was prominent on Twitter, (#realitycheque), some Tweets had over 1000 views, and one was retweeted by Chris Akabusi!

Its lead to the LCS working with SCLU to develop and create cooking kits which so far have been sent to over 1000 care leavers.

It highlighted the impact a low budget has on mental health and therefore workers have adapted the way they work to consider this.

The challenge has featured as an item of best practice in a Coram Voice “Spotlight on Practice” Bulletin.

The Challenge has been completed by other Local Authorities and workers at Social Worker England.

If you would like to learn more about the Reality Cheque Challenge, or get a copy of the resource pack so that you can do the challenge yourself, please email tanya.ward@sheffield.gov.uk

Back to Projects
Back to Top